Beer has been important in the development of civilization.  And like concrete it has been instrumental in helping humans divine their possibilities, and protect the outcome of our dreams.

In addition to making concrete for the home, I am a home brewer.  Although I have been enjoying beer for most of my life, only recently have I started to make it.  What surprised me was how similar brewing is to the visceral requirements for making concrete.

Beer has been made for a long time.  Some historians have surmised that beer, not bread, provided the catalytic spark that lead to settled agriculture.  Certainly whichever was first, the other soon followed.

The yeast to make bread, wine, and most ale is Saccharomyces cerevisiae.  Bread is made from dough, which is then cooked.  Bread dough requires flour (made by crushing grain seeds) a leavening agent (historically yeast) and water.

Beer is made from the same grain seeds, which are germinated, and heated (malted) to halt their growth and fix starches.  The grains are then steeped in a warm water bath to convert the grain starches into fermentable sugars, or malts.  This is called the mash.  The water used in the mash is then drained to become the basis of beer, also known as the wort.  Hops (or other preservative spices) are added to the wort, and the entire mixture is brought to a boil.  The wort is then cooled and yeast is added.  The nascent beer is placed in a container sealed against the elements save for an exhaust for the carbon dioxide the yeast produces as it converts malts to alcohol.

In ancient times, a low alcohol beer would have had similar nutritional properties as bread, while also providing a safe source of potable water.

Just as hands that love it should make concrete, those who hold it in disdain shouldn’t make beer.  And if you like beer, you need to know what you like about it, or you will get lost on the way there. 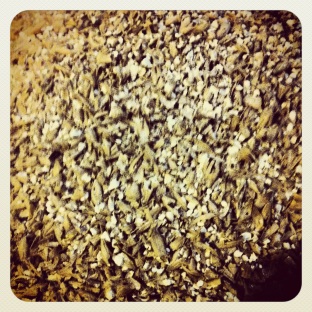 The wort is drained into the fermenter

Yeast is added to the wort

The process of making cider is similar to making beer 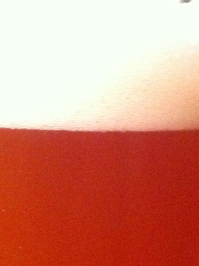 Beer and head. Even Rothko would have been happy

We are hard-wired to find faces